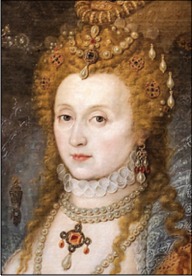 "Uneasy lies the head that wears a crown."

Volumes have been written about Queen Elizabeth I and it is all easily searchable online so it’s pointless to regurgitate those orthodox viewpoints as they only contribute further to the incorrect myths about Shakespeare. What’s important to know here, before playing THE GAME (which will be your ultimate source for her authentic connections to the Shakespeare saga) is that Elizabeth was the central reason for the cover-up… at least, for the human drama side of the story. (There is also an overarching spiritual story playing out as an archetype between these five major Players. It helps to see that aspect not so much as a cover-up but as a raison d’être.)

Without giving too much away it’s enough to mention here that there has been, for a century at least, considerable speculation that the ‘Virgin Queen’ was not, shall we say, quite what she claimed to be. So whether you’re an Oxfordian (a believer that de Vere was the true author) or a Baconian (favoring Sir Francis Bacon) there’s a royal bastard story or two (or more?) for you!

The theory goes there were ‘Prince Tudors’ waiting in the wings to continue the dynastic lineage but that admitting her non-virgin status so late in her reign would have been impossible for her. She had successfully flaunted the ‘available’ card for 30 years while England built up her defences in readiness for the inevitable attack from Spain. Had the Armada moved in at the the beginning of her reign there’d have been no ‘British Empire’, a term coined by John Dee. When it finally came, in 1588, England won overwhelmingly. It is speculated by some that Dee cast a spell on the weather (much as Prospero does in The Tempest) which turned in England’s favour and decimated the Armada’s tall ships.

Whether true or not the utterly astounding outcome was that Spain lost 91 ships and 16,000 men whereas England lost less than a hundred men and not a single ship was sunk! The stunning victory gave Elizabeth virtual deity status in the hearts and minds of most of her English subjects and the Virgin Queen became a symbol (for those who wanted it to be so) that God supported the Protestant cause over the Catholic. It’s against this backdrop that Prince Tudor theorists believe Elizabeth chose to perpetuate her virginal legacy and died in 1603 without naming any of her sons as successor to the throne.

Buckle up, we’re in for a bumpy ride!