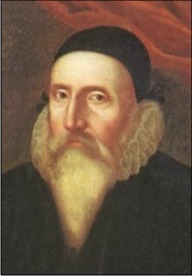 The Queen's astrologer and spy.
Leading mathematician, cryptographer of the age.

Astrologer, cryptographer and spy to Queen Elizabeth’s court, Doctor John Dee (1527~1608/9) was a leading mathematician and navigator of the age. But he was also a controversial angel-communicator, alchemist and magus, accused of being a necromancer and conjurer of evil spirits. In short, he was one of the most misunderstood characters of the English Renaissance. If you had a secret you needed to encrypt there were only two guys you’d even think of going to at the time: Sir Francis Bacon and John Dee. Many scholars (on both sides of the authorship divide) believe Dee was Shakespeare’s model for the magician, Prospero, in The Tempest. Dame Frances Yates goes so far as to speculate that Dee was the leader of the secret initiatory society known as The Fraternity of the Rosie Cross (Rosicrucians) and that he bestowed the mantle to Bacon when he passed in 1608/9.

He was the self-proclaimed Eyes and Ears of Her Majesty, the original super-spy in her European espionage network… code number 007! (The author, Ian Fleming, knew Dee’s story and appropriated it for his James Bond character.) He accumulated the largest private library in England, close to 4,000 books and manuscripts, at a time when Oxford and Cambridge Universities each had less than 500 in their respective collections. In his library were the cream of Europe’s treatises on steganography (secret communications), Jewish and Christian Kabbalah, Hermetic philosophy, mathematics, astronomy, alchemy… all arts and sciences that played an integral part in the secret sub-culture of the Rosicrucian movement at the time.

The Elizabethan era is remembered as The Golden Age but it was also a repressive regime that kept tight control on information and publishing. Ciphering was a common way around this restriction and was both the casual pastime of commoners and the serious business of politicians and their agents engaged in cryptographic espionage. But besides his spy-work (on Her Majesty’s Secret Service) Dee was also passionate in his pursuit of communications with beings he believed to be angels. And where these two pursuits meet — cryptography and the spirit world — is the heart of how the entire Shakespeare Mystery came to be encoded.

John Dee was highly respected for his many talents during his time.
But history has not looked kindly upon him.

The full story of Dee’s connection to Shakespeare can only be fully understood by diving deep into the codes which were created to hide (and yet ultimately reveal) the deepest secrets behind the identity of the great poet/playwright. That requires their step-by-step discovery, in a certain sequential order, and can only be experienced in a meaningful way by playing THE GAME. The purpose of these menu pages is to introduce you, in broad strokes only, to the key characters you will meet in far greater depth as you solve each and every step of Shakespeare’s mind-bending puzzle. You’ll be among the first to be given the opportunity to play the beta version of the app, for free, to be launched on this website soon. 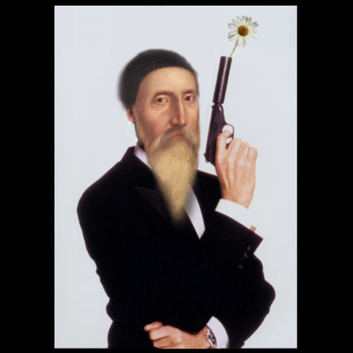