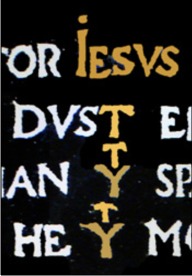 A masterpiece of deception.

Close to four million visitors pass through the town of Stratford-upon-Avon every year and the medieval church, Stratford’s oldest building, attracts tourists by the convoys of busloads in a steady stream, year-in year-out, from every corner of the globe. Since David Garrick’s 1769 Jubilee started the gold rush of heightened interest in Shakespeare, it’s safe to say somewhere between fifty and a hundred million tourists have entered the church to pay tribute or just gawk.

As they stared at the cryptic inscription on the Bard’s gravestone, struggling to read it upside down (it faces away from the chancel towards the altar) little did any of them know they were looking at the most elegant and brilliantly conceived puzzle in the entire history of cryptography. (That sounds like hyperbole but as you play THE GAME and travel this astounding journey of discovery you will come to realize it is no exaggeration.)

The quatrain on the grey stone slab has often been described as the worst piece of doggerel verse imaginable – for the greatest writer ever! It’s inconceivable that the author himself wrote it or that it could be considered a suitable epitaph to conclude such a colossal career. It lopes along in a child-like ‘humpty-dumpty dump-dee-dump’  manner and worst of all – his name is not even on it!

Note the Middle English usage of a ‘Y’ substitute for “Th”. It was a printer’s device called a ‘thorn’ that long ago fell into disuse but it turns what looks like YE into THE and substitutes YT for THAT. You see it used also in Shakespeare’s monument which bears an equally non-sensical (yet ultimately brilliant) cryptic puzzle.

The true depth of the cryptographer’s accomplishment can only be appreciated by peeling away the layers one by one – which is the purpose of THE GAME you’ll soon be invited to play, for free, in advance of it coming to market as a full-fledged app. For now I can only hint that you’re about to witness the unveiling of the world’s first crossword puzzle! Get ready. 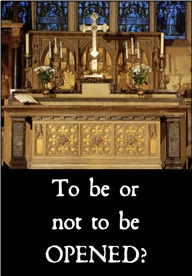 The ultimate goal — the Holy of Holies.

It’s not giving much away to tell you that the three touchstones (Gravestone, Monument and Sonnets Dedication) that serve as our ‘way in’ to the beginning of this puzzle, are ultimately leading to the Holy of Holies altar stone in Shakespeare’s church. (You learned at The Mystery home page that the codes ultimately led me to radar scan the altar stone.) So as you play THE GAME you will learn that John Dee aligned three T’s (stand-ins for Th) with two Y’s (already recognized stand-ins for Th) within the very centre of the four-line doggerel verse on the grave.

In effect he created a Tau Cross crucifix out of the name Jesus with FIVE Th’s (or T’s – they’re interchangeable) forming the vertical stipes. It’s hard not to make the connection that the FIVE Th crosses of the stipes are intended to represent Christ’s FIVE stigmata wounds – which in turn are represented in Catholic altars by FIVE consecration crosses carved into the top surface of the mensa stone.

In English Church Furniture, John Charles Cox and Alfred Harvey state that “English altars from the 12th cent. onwards were, as a rule, incised on the mensa with five crosses, namely, in the centre and at the four angles.”

In other words before an altar was officially sanctified as acceptable for celebrating Mass, a consecration ritual had to be performed by a bishop and the FIVE crosses carved into the four corners and centre of the altar’s mensa stone or ‘table’ – the flat surface upon which the sacrifice of Mass is offered. And it’s here that our story takes on almost mystical significance.

Many areas of the church were mutilated during the Reformation, as were most images considered idolatrous by the rampaging reformers. Only a few sacred artifacts escaped and undoubtedly the most important survivor was the pre-Reformation stone altar slab (or mensa) found hidden beneath the church floor in 1889 during a restoration project. Interestingly it was not found in the catacombs, seventeen feet below, but was tightly packed in earth just below the wooden floor on the south side of the nave. It was considered a providential discovery and was joyfully re-instated as the centerpiece of the church’s worshipful focus, the High Altar. 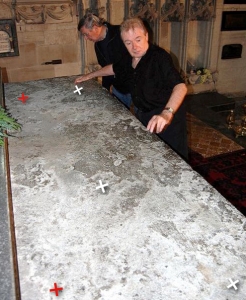 Measuring the altar stone. The cross markers (added to the picture)
indicate the currently surviving crosses (white) and the two missing ones (red).

The historical record indicates that it would have been hidden underground ’round about 1535 when Henry VIII determined the country’s fate based on his desire for a new, child-bearing wife. Many years later Dee traveled the entire length and breadth of the country specifically looking for Catholic stones, monuments, artifacts, etc., as part of his effort to save the fast disappearing legacy of his own faith.

The carving and incensing of the five consecration crosses is an immensely important ritual and is accompanied by another just as crucial to the sanctification of all altar stones. This involves cutting a cavity into the stone and placing a saint’s relics (bones, hair, writings, whatever has been sent by Rome) into the resultant opening. It is then resealed by concreting the same stone that was cut out, back into place.

So herein lies the crux of why the radar scan is such important proof. The cavity created by the ritual just described is usually no bigger than a small child’s shoe box. The scan shows a cavity approximately 250x that size, with varying densities within it, revealing the presence of ‘something’ inside the huge cavity. And thus the ‘first level’ of encryptions has been conclusively proven correct.

However, the plot thickens… 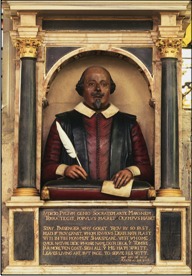 A few feet to the left of the gravestone, and up on the wall above it, sits Shakespeare’s monument. An equally cryptic text greets the viewer but at least this has his name on it. Kind of. It’s still SHAK SPEARE with no ‘e’ to soften the ‘ak’ in the first syllable. 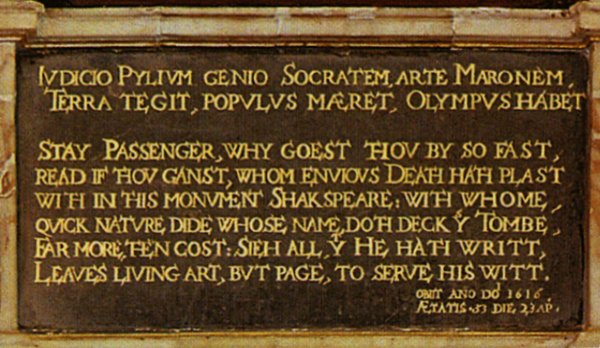 Its message is a veritable mine-field of clues and again we don’t want to spoil the fun of THE GAME by giving them away prematurely. But we can tell you that one outstanding feature of this puzzle is that each part is a self-contained unit. In other words one can solve ciphers in the Gravestone, the Monument, and the Sonnets Dedication independently of one another, which is a nice easy way to get started. THE GAME will lead you through the process, step-by-step, in the most efficient order so that you don’t waste time and effort chasing down dead ends. However, having solved each of those, all three combined fold into a greater puzzle; a deeper dive down the rabbit hole. It’s a trip you won’t want to miss so stay tuned!