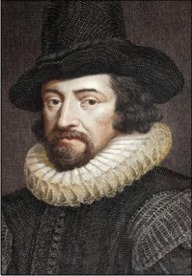 Sir Francis Bacon, Baron Verulam of Verulam, Viscount Saint Alban (1561-1626), was not only a recognised genius but also a man of many parts—a renowned philosopher, poet, orator, author, essayist, cryptographer, courtier, lawyer, parliamentarian, statesman, intellectual reformer and master of the English tongue. He was the first QC and KC, and in later life became Lord Keeper of the Great Seal and Lord Chancellor, with the titles Baron Verulam of Verulam and Viscount St Alban.

Bacon lived during the height of the English Renaissance and the beginning of the modern era, of which he is considered to be a major founder. Not only was he likened to Plato, as “the Third after Plato”, but the Royal Society of England acknowledged him as their instaurator, as also did the French Academy of France.

He referred to himself as “the herald of the new age”, and Paracelsus prophesied his appearance as “Elias the Artist… who shall reveal many things”. The Order Cabbalistic de la Rosecroix described Elias the Artist as the “Genius Director of the Rose Cross… Spirit of Liberty, of Science and Love which must regenerate the world.”

Bacon was a man of mystery—a Freemason, Rosicrucian and “concealed poet”, acknowledged as “The very nerve of genius, the marrow of persuasion, the golden stream of eloquence, the precious gem of concealed literature,” the “Light-bearer” and “Day-Star of the Muses”, “leader of the choir of Muses and their disciples,” and renovator of Philosophy by means of Comedy and Tragedy (i.e. stage plays).

Likened to both Apollo and Pallas Athena, the Spear-shaker, Francis Bacon led a studio of “good pens” and both inaugurated and led the Shakespeare scene. Clues to his mystery are given in his unique titles, Baron Verulam of Verulam, which means ‘Spear-shaker of Verulamium’, and Viscount St Alban, which is the name of the Romano-British saint, St Alban, the reputed founder of Freemasonry in England. The higher degrees of the original Speculative Freemasonry were those of the Rose Cross.

Bacon not only headed the Rosy Cross Fraternity (Rosicrucians) but his Great Instauration is based on ancient wisdom and biblical and cabalistic principles. A study and knowledge of this is a major gateway into the true but veiled ever-living Wisdom Tradition. The aim is to discover truth. 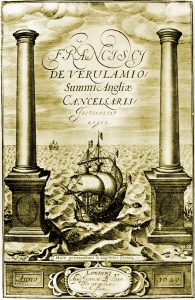