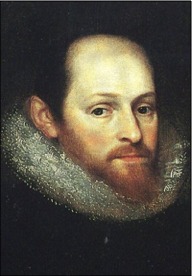 His name means 'True' in Latin
and 'Holy of Holies' in Hebrew.

Alan discusses the importance of opening the Altar Stone to find out why the true
author/s of Shakespeare’s works was kept secret.

When the 16th Earl of Oxford, John de Vere, died unexpectedly in August 1562, his son Edward’s world was abruptly turned upside down. The twelve-year-old boy was suddenly the new, 17th Earl of Oxford, Lord Great Chamberlain of England, about to make his entrance onto the world stage. The fact that he did so with a hundred and forty horsemen accompanying him, all dressed in black, remains a strangely unexplained historical anomaly. One of countless such unsolved mysteries surrounding the life of this quixotic nobleman.

When Elizabeth the First had made her entrance as the new Queen she had only 60 more horsemen announcing her arrival. What must the London commoners have made of it… a mere kid, entering the gates of London with such an extravagant retinue? He must’ve looked like a prince, so royally protected, on his way to becoming a ward of court of the crown under the guidance of the Queen’s Lord Treasurer and closest advisor, William Cecil.

Indeed his journey was just beginning as he left a widowed mother he never felt any connection to, and rode toward an entirely new, unimaginable life, close to Elizabeth’s famed court. Within the walls of Cecil’s newly-acquired home, Theobald’s, was the greatest library of the time and the most renowned teachers of the age. In short, the best education available in the known world. Precisely the upbringing one would expect might produce a great writer. (Possibly the greatest of all time?) Shakespeare himself would later describe just such a scene in the opening lines of All’s Well That Ends Well:

“And I in going, madam, weep o’er my father’s death anew;

but I must attend his majesty’s command, to whom I am now in ward,

Thus spake Bertram on his way to an unforeseen destiny.

To those who believe there’s no mystery… the man born Gulielmus Shakspere at Stratford-Upon-Avon in 1564 wrote the greatest literary works in western history. This is what we were all taught in school and believers in this traditional view are called Stratfordians.

To those who think there’s something rotten in Warwickshire… the man born Edward de Vere at Hedingham Castle in 1550 adopted the pen name Shake-Speare to hide his identity behind the mask of the Stratford man. De Vere has been one of the leading alternate ‘candidates’ for Bard-dom since he was first identified in 1920 and believers in this theory are called Oxfordians.

Of all the small mysteries wrapped up within the great overarching mystery of this cover-up, perhaps the most baffling concerns the utter silence that greeted the deaths of both these protagonists. Not only did each event go completely unnoticed by the general public (and even key players at court who should have been in the know) but there’s a mathematical precision to the dates themselves which virtually precludes them being accidental.

William of Stratford just happened to die on his own birthday, which is not impossible of course just curious. Until we realize that his birthday is actually unknown and has been conveniently calculated by working backwards from his baptism date, April 26th, or 4/26. Edward de Vere passed on the date that’s its exact mirror image: 6/24, June 24th.

When the final curtain was drawn on the greatest literary age in history and the famous First Folio (Mr. William Shakespeare’s Comedies, Histories, & Tragedies) was published in 1623 it was supposedly organized by the great writer’s actor friends, John Heminges and Henry Condell. But, as you are about to learn as you play THE GAME (the most concise way of journeying through the mystery in bite-sized, step-by-step sequence) the cumulative weight of evidence against this theory is overwhelming. The official Stratfordian story conveniently ignores the uncomfortable Oxfordian fact that the first thing you see, after turning the page with Shakespeare’s bizarre engraving on it, is this dedication: 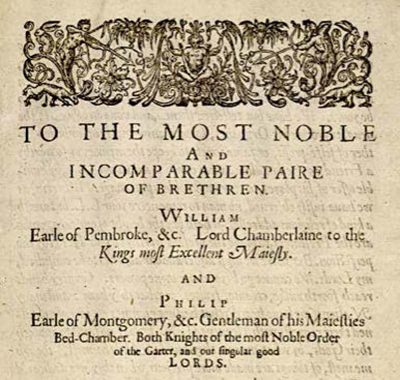 Why would the great man’s entire corpus (arguably the most important dramatic works the world has ever witnessed) be dedicated to two noblemen intimately connected to Lord Oxford’s family?