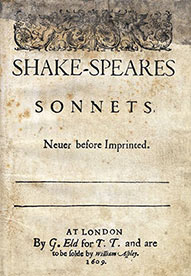 Shakespeare encoded advanced math constants
centuries ahead of his time.

To those of you new to the whole Shakespeare mystery this section may come as a complete shock and even feel momentarily disorienting. (What on earth has the writer of Romeo And Juliet, Hamlet, and all those stuffy History Plays got to do with Sacred Geometry? Or, God forbid, advanced mathematics?) On the other hand there are those who’ve been following these discoveries for a few years who have told me they think this is one of the most fascinating things about him.

The Sonnets title page encodes the world’s most important math constants and the precise coordinates of the Great Pyramid.

Lines connecting conspicuous dots on the title page form isosceles triangles whose angles add up to an astounding revelation.

At one level this is just the third ‘mini-puzzle’ that follows the same structure and path to solution as the Gravestone and the Monument texts do. The Sonnets Dedication is yet another cryptic puzzle full of delightful easter eggs and “ah-hah!” moments that are fairly easy to solve and lead us toward a very satisfying conclusion.

Key clues are revealed in certain Sonnets that correspond with important days of the year.

In a seemingly impossible feat, the number of sonnets, lines, words, characters form a pyramid (minus 1), with a remarkable surprise at the end.

The stark truth is the man widely revered as the greatest poet/playwright ever was not just the hottest thing in the theatre at the time, he was also a polymath genius who hid forbidden truths deep within his art. Truths so dangerous they couldn’t possibly be spoken of openly during his lifetime. Precise awareness of math data no-one had access to at the time and the world would not know accurately for hundreds of years to come.

Back then the church had a name for such inexplicable abilities; they called it witchcraft. And the punishment was death by burning at the stake. So throughout the sonnets he refers to this hidden knowledge in oblique terms: “my gracious numbers”, “eternal numbers”, “fresh numbers number all your graces”. And you may say that’s just poetry, it’s subjective, it’s not proof of anything. But he knew that, of course. So he encoded the incontrovertible, slam-dunk proof in plain sight for truth seekers to discover at some far distant date.

Well, that distant date is now. And that truth seeker is you. And the real deal, coup de grace proof has been staring us in the face for over four centuries in the picture you see below: the title page of Shakespeare’s Sonnets.

It defies logic, challenging many of our conventional beliefs and it’s as exact and rigorous as any Einstein proof, written in the purest language possible: geometry. But don’t worry, you don’t have to know or do any math at all. Just sit back and marvel at the stunning beauty of what has been done! 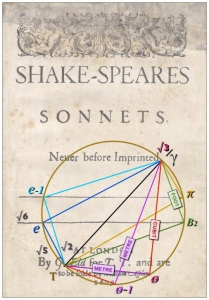 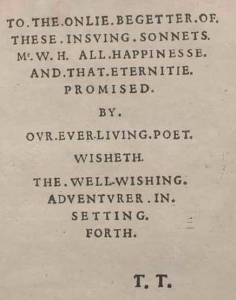 You will solve these soon after starting THE GAME and will no doubt experience the same sense of wonder that I had when discovering this around 2008. It feels as though the author has challenged us to enter a beautifully crafted maze and allowed us to get a sense of real accomplishment at having navigated it and pocketed a prize for the effort. In fact you will be rewarded with prizes — digital downloads of chapters of Book I: Dee-Coding Shakespeare. As you solve more and more clues you’ll eventually have won the whole book. (You’re welcome.)

But then the other shoe drops and you realize this goes far deeper than you ever imagined.

NOTE to all true nerds:

The video at the top of this page is intended for a general audience as an ‘entry-level’ introduction to this stunning side of Shakespeare the world is presently unaware of. In it I mention a YouTube channel where those who wish can go check out the deeper math. That resource has been relocated to The Math sub-menu above, where many important questions are answered that were impossible to address in the introductory video.