In 2004 my friend, Michael Dunn, invited me to his one-man show, Sherlock Holmes Solves The Shakespeare Mystery. I went reluctantly — out of obligation rather than enthusiasm. I’m English but the Bard had never interested me; it sounded like I was in for a depressingly academic evening of archaic quotes. In tights.

Ah, but there are more things in heaven and earth, Horatio, etc.

Halfway through Michael’s show I knew in my gut I’d found the “really big thing” I’d been looking for the past couple of years. A broad canvased, emotionally-significant story to sink my creative chops into. I vowed before the show was even over, that this would be the material, the seed, for the musical I would write.

Little did I know it would change my life completely, sending me on a 12 -year odyssey of astounding discoveries which shatter our preconceptions of what we think about the greatest writer in history.

Along the way I found scandal, subterfuge, a whole modern history of deceit, vested interests, and protectionism. But above all I found the most elegant, perfectly constructed system of cryptography revealing a mega-genius of unparalleled mathematical gifts and spiritual wisdom.

Gradually that old conspiracy-theory question, “Who was Shakespeare, really?”, had to be replaced with a far more profound one: “What was Shakespeare? Really!”

The adventure has been so engrossing that the musical had to be put on hold until I could finish documenting the mad riot of hidden clues that kept driving me deeper and deeper into the most baffling literary mystery of all time. 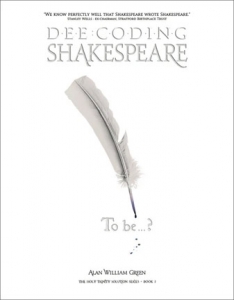 Dee-Coding Shakespeare was just released in September, 2016. BardCode will be released somewhere around the Winter of 2017. The Shakespeare Equation will follow in the Spring of 2018.